The Dirt on Soil, Compost, and Mulch in Seattle

What is soil? What is compost? What is mulch? What's the difference? Does it matter? The answer to the last question is yes, it matters, and if you know the difference you can have a healthier landscape.

When your jeans are dirty and need washing, you might say your jeans have dirt on them-dirt is not a medium for growing plants. Plants are grown in soil, and soil has four principal components: air, water, mineral (weathered rock fragments), and organic matter such as decomposed plants. Its composition varies from region to region, and different plants grow better in different types of soil. Healthy soil is full of life. A quarter teaspoon of topsoil can contain a billion microorganisms, and these organisms, such as bacteria, fungi, and algae, help break down the remains of plants and other organisms that release energy and nutrients to growing plants. 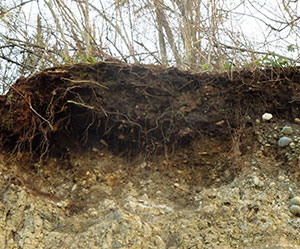 Undisturbed topsoil (the dark brown layer at the top) provides energy and nutrients to growing plants. Image courtesy of Janine Anderson
Soil texture is determined by its mineral particles, which are a combination of sand, clay, and silt. Sand particles are the largest and clay particles are the smallest. Soils near shorelines are often sandy. Water and nutrients run through them quickly, so plants in sandy soils need watering more frequently, along with added nutrients. Clay soils are wet, and added water sheds or pools rather than infiltrating and draining through. They are often dense and compacted, making them difficult to work and making it hard for plant roots to grow; movement of air and water is slowed. Medium textured, tillable soils with less than 27% clay are best for most plants. These include loam, which has roughly equal proportions of sand, silt, and clay; sandy loam, which has a higher concentration of sand; and silt loam, which has a higher concentration of silt.

A soil's acidity is determined by rainfall. The greater the rainfall, the more acidic the soil. The pH of Western Washington soils is usually in the range of 5 to 7 (pH values below 7 are acidic), while the soils in Eastern Washington are more alkaline, with higher pH values. “Acid-loving” plants such as rhododendrons and blueberries are often recommended for Western Washington gardens because of the lower pH values of the soil.

Compost is created by the breakdown of organic matter such as dairy manure and grass clippings. Over time, the addition of organic compost to a clay soil can transform it from a mucky mess into a viable plant medium, and compost can improve the water-holding capacity and fertility of a sandy soil. Most tree roots are in the top 6 to 9 inches of soil, so that is the area most critical to plant health.

Cedar Grove Compost is a good commercial compost made from food scraps and yard waste generated by Seattle residents. Bailey Compost in Snohomish is a combination of yard waste and dairy manure and is available in bulk for pick-up or delivery. Avoid products composted with chicken manure; according to Dr. Linda Chalker-Scott of Washington State University Extension Urban Horticulture, chicken manure inhibits beneficial microbes in the soil. More information can be found in the Seattle Composting Resources Guide published by Seattle Public Utilities. 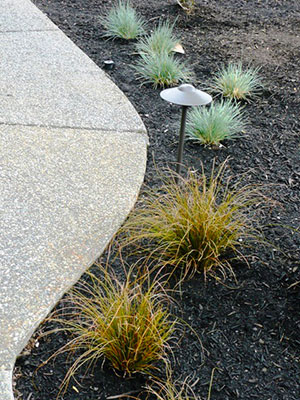 Applying mulch around a new planting helps retain soil moisture; prevents soil erosion; aids in weed suppression; and protects plant roots from heat, cold, and drought. Image courtesy of Janine Anderson
Mulches are laid on top of the soil rather than worked into it. Composts can be used as mulches, but not all mulches can be used as composts. Unlike composts, mulches are not necessarily broken down organic matter; materials such as shredded tires are promoted as mulches by their manufacturers, but please don't use them in your garden. Two to three inches of mulch applied to the surface of the soil around (but not burying) the crown of woody plants helps hold in moisture, thus reducing irrigation needs; protects plant roots from heat, cold, and drought; and helps hold soil in place, reducing erosion. What mulches don't necessarily do is add nutrients to the soil.

If you use organic compost as your mulch, you will still have to weed. Arborist wood chips are highly recommended as mulches, and they are often available at no charge from area tree companies. Arborist chips are a mix of bark, wood, and often leaves that together create a healthier soil community than is possible from more uniform products, such as finely shredded bark. Unlike compost, arborist chips are also useful for weed suppression. As with compost and other mulches, wood chips should be kept away from the trunks of woody plants to prevent moisture build-up around their bases. 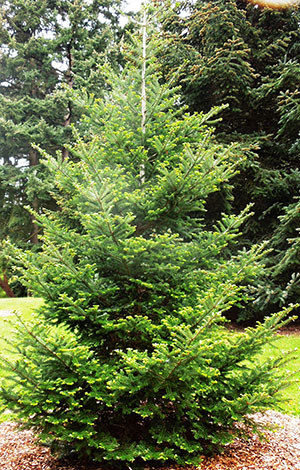 Arborist wood chips used as mulch below a conifer in the University of Washington Botanic Gardens provide many benefits, including protecting the tree roots from compaction caused by foot traffic. Image courtesy of Janine Anderson
When you walk through undisturbed woods, the ground is soft, yet supports your step. Fallen needles, leaves, downed trees, and other decaying organic matter work with the birds, worms, bacteria, microbes, and other critters and microorganisms to create the ideal environment for plants to thrive. Most of us garden on sites that have been disturbed.

Perhaps the topsoil has been scraped off and the ground compacted by machinery and human traffic. Over time, we can improve the fertility and texture of our garden soil by incorporating compost and applying mulch.

Soils science is complex, and this article hardly scratches the surface. If you would like to know more about your particular soil and how you might improve it, consider having your soil analyzed by the King Conservation District.

More resources about soils, soil testing, compost, and mulch have been compiled by the Elisabeth C. Miller Library at the University of Washington Botanic Gardens.